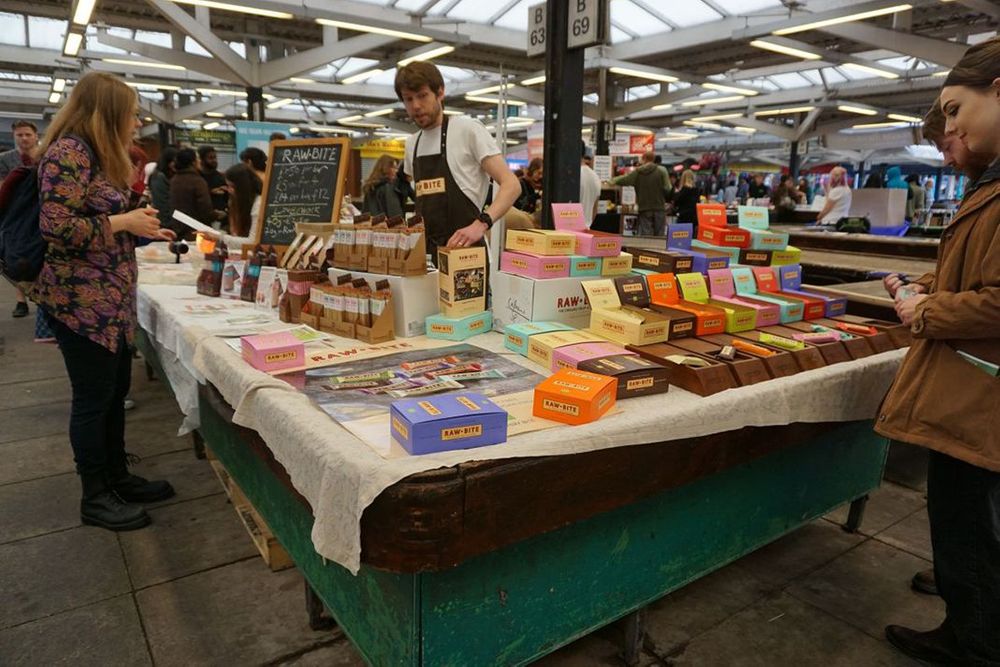 Walking through the alley between Gallowtree Gate and Market Square, I had a pleasant surprise. It was Sunday and raining but the market place was brimming with people. Not just people but vegan and open-minded people. The best kind. I’ll hold my hands up now and say I wasn’t expecting this. The idea of Leicester’s own vegan market being a big hit seemed bizarre to me, probably because as a relatively new vegan I didn’t know many vegans in Leicester. That day they all seemed to have ventured out to prove me wrong.

Despite Mother Nature not being on our side, we were well protected by the sturdy cover of Leicester’s well known outdoor market. It wasn’t until I stepped out in search of money, because needs must, that I realised it was still raining. I think at times I even forgot where I was and just became enveloped in the vegan bubble that had been created by the Leicester Vegan Community.

My hunger was satisfied by Temple of Seitan, who were serving delicious southern fried fare and Vie for Vegan where I bought mini strawberry macaroons after a chat about making aquafaba. The penultimate slice of New York cheesecake, from Mex it Up, was also mine to take home for later. This was also enjoyed by some non-vegan friends who were very pleasantly surprised how good they tasted.

My favourite food purchase had to be from Lettices. All week I have been enjoying slices of their ‘Better Feta’ any which way I can. Keen to eat it but at the same time not wanting it to go too quickly, I can’t wait until their online shop opens on the 1st July.

My vegan home was treated too, with the purchase of prints, a candle and a mug. The beautiful artwork of Verna Poppy Designs, a young vegan artist currently living in Nottingham, was hard to chose from and so I bought three of her prints (and a mug) depicting human, animal and floral life together.

I also couldn’t resist a print by Girl Against the Clones, whose text summed up marvellously how I feel about veganism. It will look great in my kitchen. My home purchases were completed by a delicious apple pie candle from Harper’s Bizarre.

There were so many great stalls and so many happy faces from visitors to stallholders. Leicester Animal Rights did themselves proud showcasing their efforts and achievements and most importantly their passion for helping all animals. The cooking demos went down a treat, assisted most ably by the fantastically entertaining announcers.

I could wax lyrical about so many of the stalls but instead I’ll leave a list and let you discover them for yourselves. One thing’s for sure: Leicester has gone for the hat trick and won – historical fascination, sporting glory and now trailblazing compassionate living. If the comments on Facebook are anything to go by this may have been the first but it won’t be the last.

The Results Are Record Breaking, But Veganuary Is Only Warming Up!

Several years ago, few people had heard the word ‘Veganuary’. It was a weird portmanteau, difficult to pronounce and decipher. Fast-forward to January...

There are now enough vegans in the UK to populate all of Sheffield, the 5th largest city in the country. This statistic was recently revealed by the V...