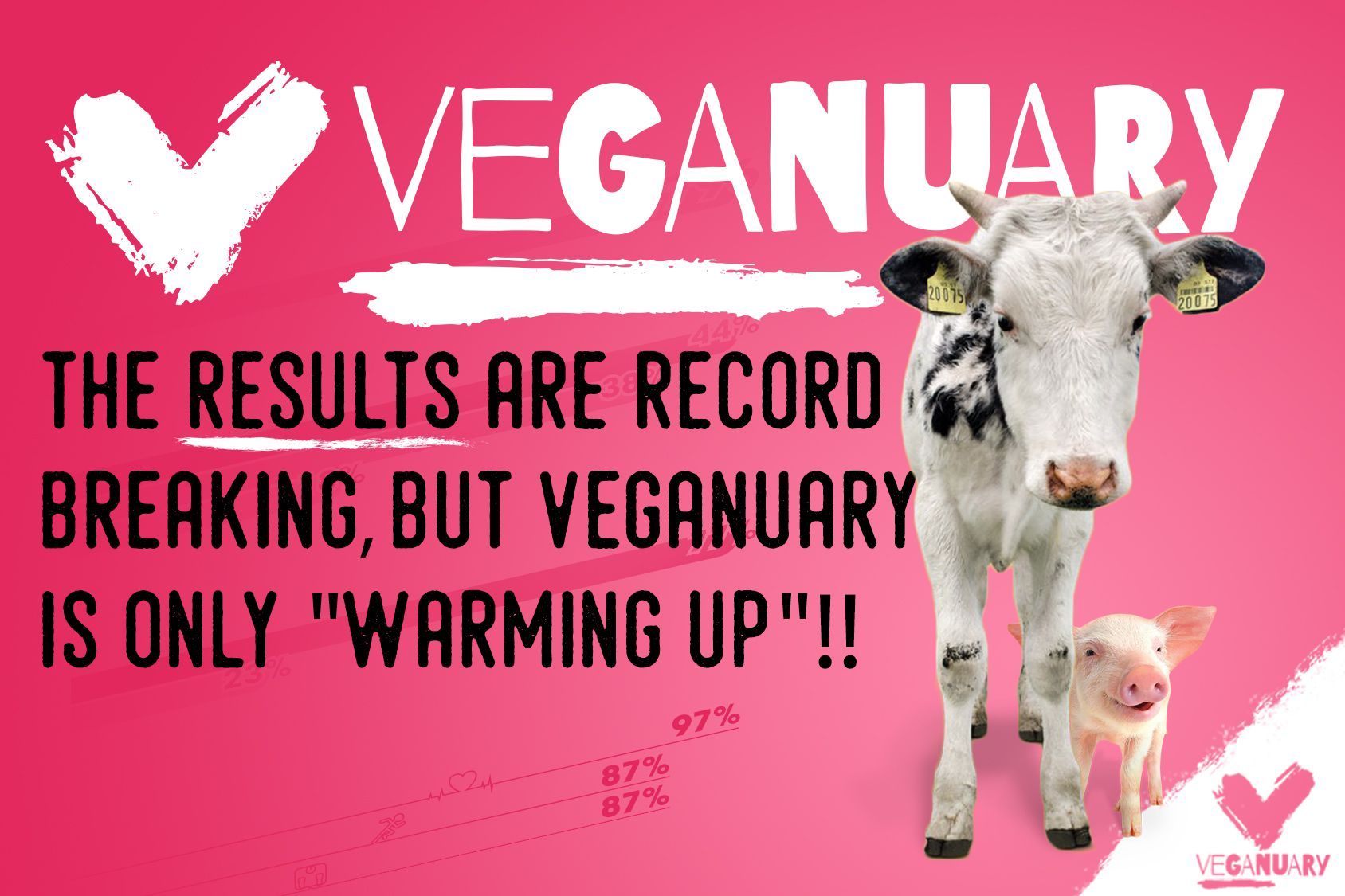 The Results Are Record Breaking, But Veganuary Is Only Warming Up!

Several years ago, few people had heard the word ‘Veganuary’. It was a weird portmanteau, difficult to pronounce and decipher. Fast-forward to January 2017 and a record breaking 59,500 people had signed up for the latest Veganuary pledge to go vegan for 31 days and now the word circulates throughout the mainstream press as well as the everyday vernacular.

So, what is Veganuary?

Veganuary is a charity dedicated to changing public attitudes toward veganism and aims to make the transition to a plant-based diet as easy, enjoyable, and delicious as possible. It was founded back in 2013 by husband and wife team Jane Land and Matthew Glover. Both had been struggling to find an effective but approachable way of driving change and helping animals.

Inspired by well-known campaigns, such as Movember , the timing of the campaign is a large part of its success. By picking January, it takes advantage of many people’s desire to make a significant change in the New Year. It also offers a dry run at a new lifestyle and works as a handy excuse for those put off by scrutiny from friends and family over their wish to make such a fundamental life change.

The first campaign convinced 3,300 people to take the pledge—a drop in the ocean of what was to come. The charity’s steady work over the last few years has helped propel the vegan ideal into the mainstream consciousness.

December last year saw 2,500 Veganuary posters rolled out, on train carriages, across the London Underground—as a result of a highly successful crowd-funding effort—making it almost impossible to ride the tube without seeing the faces of Rocky the calf, Ernie the piglet, and Little Eric, helping to link the meat sold at supermarkets to the individuals it came from.

This incredibly comprehensive website is a jewel in the campaign’s crown. There are hundreds of recipes to browse, health advice, and recommendations on eating out; as well as lists of alternative foods, clothing and households items—offering a vegan-friendly substitute to almost everything.

How successful was the 2017 Veganuary campaign?

Twice a year the Veganuary team run a feedback survey; the first, immediately after January, and the second, 6 months later. The first round of results for 2017 recently came in and an incredible 67% of participants have said that they will be remaining vegan!

2016’s survey showed that, of those who remained vegan, 52% had motivated someone else to go vegan too, showing that one person really can make a difference.

The success of the campaign can also be measured in the number of animal lives saved, which—for many of us—is the most important reason to be vegan. As the consumption of animal produce dwindles, so too does the demand.

According to PETA , a month of vegan living spares roughly eight animals, so even if participants do not remain vegan they still make an incredible impact in just one month. I can personally attest to the power of Veganuary, after a conversation with a friend who had taken part in the campaign, I too was convinced it was the right thing to do—thanks Amy!

What’s next for Veganuary?

Matthew and Jane are determined to, at least, double the number of participants again next year and hope to do so by rolling out campaigns in the US, Australia, and New Zealand. The long term plan also focuses on targeting Spanish speaking countries and much of the Veganuary site has already been translated.

The team are also hoping to persuade more men to try veganism— 88% of Veganuary participants are women . As their research has shown, women tend to be more perceptive to animal rights issues whereas men tend to focus more on the health and environmental advantages of veganism. Next year’s campaign is likely to focus on these factors as a way to persuade more men to give veganism a go!

It would seem that this moralistic marketing campaign style may be the way forward for the movement. Along with poster campaigns from PETA and Go Vegan World , the word is getting out there in a familiar, educational, and non-aggressive way—and the results speak for themselves.

> See what Veganuary is up to now: veganuary.com

What can you do to help Veganuary?

> Volunteer your time or skills
> Make a donation

Walking through the alley between Gallowtree Gate and Market Square, I had a pleasant surprise. It was Sunday and raining but the market place was bri...