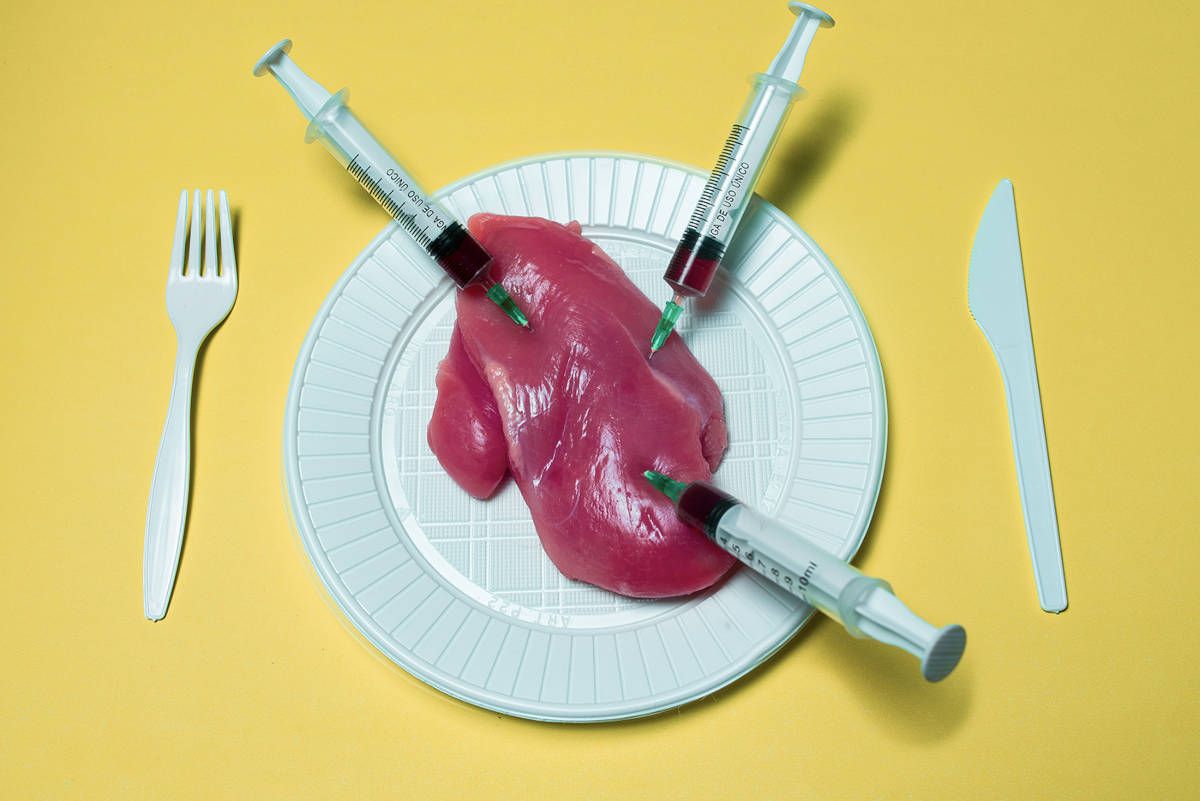 Six Lies Most People Believe about Meat and Dairy

This article aims to debunk some of the most persistent myths spouted by the meat and dairy brands, designed to deceive consumers into purchasing products which wreak havoc with their health, damage the environment and cause the suffering of billions of animals.

Most people don’t realise the extensive production process behind the neatly-packaged meat products they purchase from the supermarket. Meat contains a protein called myoglobin, which starts turning from red to brown once it is exposed to air.

Hence, meat which is deep red is often considered to be fresher, and therefore more desirable. But, the way products appear on the shelves is not actually indicative of their quality, since producers use artificial ‘colour-fastness’ methods including dyes, nitrates and carbon-monoxide, to keep ageing meat looking fresh.

Such practices are part of the industry’s scheme to conceal the grim realities of consuming flesh with customer-friendly branding.

Diets high in fat and protein, low in carbohydrate — such as the Atkins and Ketogenic diets — have become popular as fast weight-loss solutions. Such diets advise participants to reduce their carbohydrate intake to a maximum of 50g per day, in order to force the body into ketosis (burning stored fats).

From the study: Dietary carbohydrate intake and mortality, The Lancet

Typically, dieters subsist off high-fat, high-cholesterol, heavily processed animal products and completely deprive their bodies of nutritious plant foods for as long as the diet endures.

Short-term side-effects include fatigue, dizziness and rapid weight regain (due to the extreme, unsustainable nature of these diets). Long-term, participants experience vitamin deficiencies, decreased metabolic rate and an increased risk of cardiovascular disease, caused by an extremely high intake of animal-derived saturated fat and cholesterol.

A study presented at the European Society of Cardiology Congress found that people on very low carb diets had the highest risk of dying of cancer and cardiovascular problems.

Furthermore, a separate study published in the Lancet discovered that diets based on animal-derived protein and fat were associated with higher mortality, whereas plant-based diets were correlated with lower mortality — thus, highlighting the dangers of consuming large quantities of animal-derived foods while reducing intake of plant foods — a major source of vital vitamins and minerals.

Due to its calcium content, drinking milk has long been touted as the optimum way to ensure strong bone development, however recent research directly contradicts these claims.

The findings of scientists at Harvard University debunked the myth that milk consumption protects against osteoporotic fractures.

This is because animal proteins produce acid as they are broken down , and calcium is an acid neutralizer, therefore the calcium in the milk, as well as some already stored in the bones, is used to digest the proteins in the milk rather than contributing to bone density.

The association between the intake of animal protein and fracture rates appears to be as strong as that between cigarette smoking and lung cancer.

Furthermore, milk — like most animal products — is very high in cholesterol and saturated fat; a single serving of whole milk may contain up to twenty percent of a person’s recommended daily intake, and high-fat diets lead to obesity and an increased risk of heart disease, strokes and cancer.

A Swedish study published in The American Journal of Clinical Nutrition found that women who consumed just four servings of milk products per day were twice as likely to develop ovarian cancer.

Brands use labels like ‘organic’ and ‘free-range’ to convey the idea of animals raised lovingly in lush, green pastures lead more ‘natural’ lifestyle than those kept in factory conditions.

This picturesque image of harmonious, natural farming is highly deceptive. In fact, organic regulation merely states that animals should have ‘access to pasture’, but dictates no minimum requirement.

Furthermore, there are no rules to protect animals on organic farms from inhumane practices such as debeaking, dehorning and castration (without pain relief); male chicks may still be disposed of through grinding or gassing and female animals are repeatedly impregnated through artificial insemination only to be separated from their young shortly after birth.

If they become sick, excruciating udder infections are common amongst dairy cows, organic animals are often deprived of treatment, since the use of antibiotics is prohibited according to organic regulations.

Organic produce is also more expensive than standard products, as consumers are lead to believe that they are investing in a healthier, more natural alternative. However, there is no substantive evidence that organically produced food is safer or more nutritious than conventionally produced food.

Organic or free-range meat and dairy products contain no less of the dangerous saturated fats and cholesterol found in regular brands.

#5 Eggs are a healthy source of protein

Many ‘healthy’ diet plans promote eggs as a healthier source of protein than red meat, since they are lower in saturated fat.

However, this advice completely disregards the high cholesterol content within egg yokes. A single medium yoke contains, on average, 186 mg of cholesterol — almost half of the recommended maximum intake of 300 mg per day.

Furthermore, eggs are high in choline, a compound also found in red meat which the body converts into a toxin called trimethylamine, excess of which has been linked to increased risk of fatal heart problems.

#6 Animals are slaughtered in hygienic conditions

A 2017 investigation into 323 British abattoirs found that over one quarter of establishments were failing in basic hygiene precautions to prevent meat becoming contaminated, exposing consumers to potentially deadly bacteria, such as E.coli, salmonella or campylobacter.

Common offences include carcasses coming into contact with the slaughterhouse floor, equipment not being adequately sanitized, and meat being washed with unclean water. All of which result in meat for human consumption becoming contaminated with bacteria-riddled faeces, and other detritus of slaughter.

Animals become caked in their own excrement when they are transported long distances in cramped, unsanitary lorries, hence the factories in which hundreds of animals are slaughtered and processed every quickly become hot beds of bacteria.

Food borne illnesses pose a serious risk to public health in the UK, affecting around a million people and causing hundreds of deaths per year; some of the largest outbreaks of food poisoning in recent years have been directly attributed to the consumption of contaminated meat.

If it was one in 100 (abattoirs) even that would be too many but one in four is unacceptable. This is basic hygiene... The FSA should be coming down on this like a ton of bricks.

Don’t believe everything you read!

The media is teeming misinformation about dietary health, providing misleading advice on how certain foods are beneficial or detrimental to our health. Much of what is presented as ‘fact’ is actually part of the meat and dairy industries' PR scheme to promote the consumption of animal products as nutritious, natural and beneficial to the human body, in spite of mounting scientific evidence which indicates otherwise.

This nutritious snack is delicious, especially on a lovely sunny morning, and will keep you filled up until lunchtime. Don’t like banana or mango? You...

Grow Your Own Veggies: Read About Gardening

To successfully grow vegetables and fruit, it is important to read about all aspects of gardening. Once you have started, you will gain valuable exper...