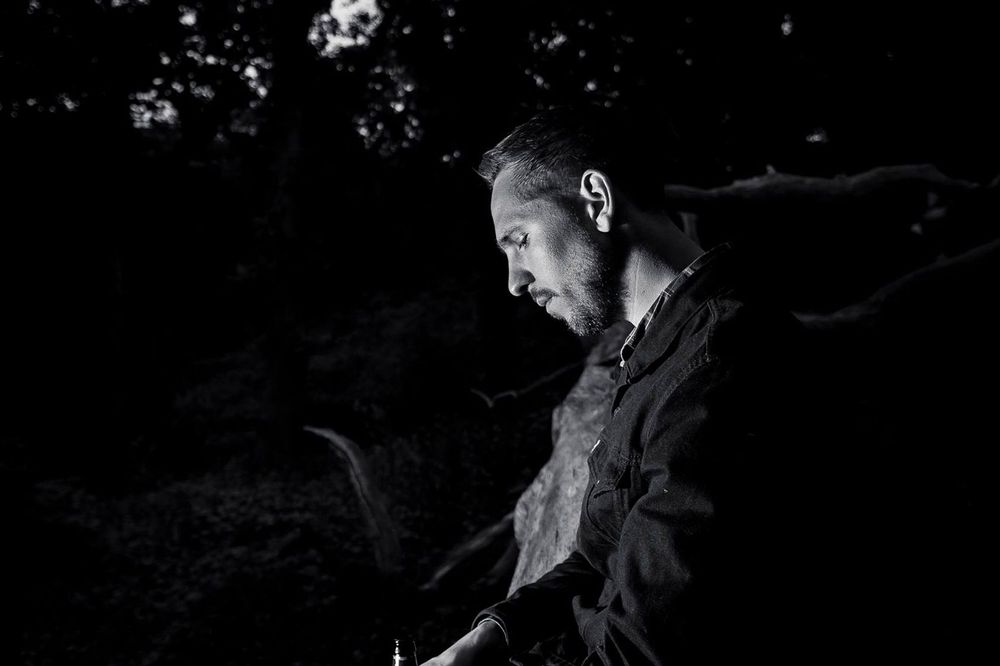 I met Ellis Slater and his Jack Russell, Molly, in the Blue Posts pub in Soho. We chatted over a couple of (vegan-friendly) beers and I polished off a delicious Korean-style curry, heavy enough on the red pepper paste to transport me briefly back to Busan, my once-home. But that’s enough about me. It’s time to meet Ellis – a vegan music-maker.

“I hate it!” Ellis chuckles when I mention music. He’s quick to u-turn: “No… I love it!” I ask if he studied music and, again, he laughs. “No… I tried to get into music college but I didn’t know my chords. He clarifies. “I can play them, I just don’t know what they’re called. I go by the sound and the feel.” His first band was called The Misnomer. He and The Misnomer’s drummer then segued into Strange Planes but Ellis is focusing more on his solo work at the moment.

“My solo stuff is kind of dark, acoustic rock,” he explains. “I’ve written fifteen songs for my new album which I’m recording in August. I booked the studio time today, actually! I’ll probably get rid of five crap ones and keep ten good ones. It’s a lot easier doing it alone,” Ellis continues. “It’s just me and my guitar so I can get to gigs more easily without having to worry about a drum kit or a PA or sound guys.” Talking more generally, he says: “Going on tour, meeting people and seeing their way of life. It makes you who you are. Plus, there are a lot of vegetarians and vegans in music. Maybe artists are just smarter than everyone else?” he jokes, firmly tongue in cheek.

I ask him about the attitudes towards veganism he’s encountered from within the music industry and he’s unfailingly positive. “Other bands I’ve played with are usually thinking along the same lines. If they’re not passionate about being veggie or vegan specifically they’re passionate about something else. There’s a lot of respect, no matter what you’re doing.”

The journey into veganism

Ellis has been fully vegan for 2 years. Prior to that he was vegetarian for a year and had a “cheating” period (what others would call a transition!) of 6 months. Straight away, he tells me how easy it was to give up meat. This is something I always love to hear, as it is often one of the biggest fears when people consider a plant-based or vegetarian diet. He was also quick to say, though, that the move from vegetarianism to veganism was tougher than the initial giving up of meat. He still misses eating eggs and is all-too aware of the societal stigma around veganism, from which vegetarianism seems to escape.

Originally, Ellis credits bad quality meat for the decision to become vegetarian. A little bit of research and a love of animals (all animals, from spiders to sharks) cemented the decision. As with many vegans, it was a documentary – The Cove – that convinced him to make the switch. A lover of all things sea-related, it was the cruelty he observed while watching the film that made him realize he no longer wanted to be a part of it – any of it – and so Ellis began the transition into veganism. While he recalls it feeling quite challenging at the time, he now sees it as very black and white: the decision was made and that was that. Done. No going back.

The mindset that so often comes with veganism is what helped to keep that motivation moving forward: the lens through which things are viewed changes. “When people think ‘cheese’ they probably think ‘melted on a pizza,’” says Ellis. When I think ‘cheese’, I just see a really ‘unhappy cow’.” I experience that too and we agreed that the link is made unconsciously and almost instantaneously.

The positive things about becoming vegan

Since making the transition, Ellis has seen a lot of positive changes. He’s lost a lot of weight – he tipped the scales at 15 stone in his pre-vegan days. He feels healthier, but happily counteracts that with enjoying a cheeky pint or three. The biggest positive though? “A cleaner conscience.” He talks passionately about his newfound thirst for knowledge too. “I began to question other things,” he says. “As I started thinking about animals, I realised I was beginning to think about people more, and politics more. I thought, ‘If I can change that about myself, I can change other things too.’ I wasn’t like that before. Before, I was one of those the arseholes asking why you were vegan.”

“YOU HAVE TO LET PEOPLE ARRIVE AT THEIR OWN CONCLUSIONS. I’VE LEARNED TO CALM DOWN NOW AND I’M OK WITH THAT”

‘Why?’ is the question Ellis is asked most often about his veganism; how he deals with it can change depending on the situation. He describes something I’ve also experienced: the undertone of judgement when being asked this by friends and family. “It’s odd because I feel like I should be the one asking them why!” I agree and he continues: “I think I used to come across a bit aggressive. There was definitely that ‘angry’ stage where I was annoyed with everyone who wasn’t vegan. I’d constantly post stuff on Facebook that no one responded to and realised, eventually, that there’s no forcing it. You have to let people arrive at their own conclusions. I’ve learned to calm down now and I’m ok with that.”

I then ask Ellis about the impact his beliefs have on his career and the music he makes. “I got really annoyed the other day when I bought a new guitar. There were all these gorgeous leather straps and I was so tempted. They were being offered to me free. I ended up taking a shitty plastic one but a friend bought me a lovely fake leather one so I’m happy.

“I do lots of vegan events now, BBQs, beer festivals. I figure I have a one-up on anyone who isn’t vegan and I know I’ll get fed!” And music-wise? “I’ve touched on it a few times. Veganism, love, there’s just so much to write about! I don’t think it should all be about one thing.

“When I was entrenched in my ‘angry phase’ I wrote a song that became Strange Planes’ first single. I called it ‘Animal Rights’. I was questioning why everyone wasn’t doing the veganism thing so I wanted it to be obvious. It’s a really cheesy name; I knew it was cheesy. There’s a cool video that goes with it though, that was really fun to make. And it doesn’t sound cheesy when you actually hear it. In my head I was thinking: ‘It’s going to explode and have this big impact and big message.’” He shakes his head. “We had a PR push on it, but it didn’t happen.”

This week, however, Ellis embarked on an unexpected music-making journey. A monthly booze-fuelled meeting with a friend was thwarted by sobriety so drinking was replaced with writing and recording. “I jumped on the National Express with my guitar and basic recording equipment,” he tells me, “And instead of boozing we wrote and recorded four songs.” Ellis and Benny J. Hayes liked them and decided to put out an EP – West St. EP – which will be available to buy on Monday 8th August (Today!).

All the money from the first week of sales will be donated to Hollyhedge Animal Sanctuary in Bristol.

What are your top 3 albums of all time?

The hardest question without doubt!
Limbo Messiah by Beatsteakss. They’re a Berlin band and it’s just a really great album.
Nimrod by Greenday. Classic. I remember going into town after school to buy it so loads of memories. And also, it just rocks.
Ben Folds Live by Ben Folds. He put the ‘F’ upside down to make it look like an ‘L’.

Pizza! Everyone’s favourite, surely? I make it with Violife’s melting cheese. My only tip would be not too use too much – it’s really creamy! Really creamy. I also love curry and often use fake meats to give me something to chew on!

Tibits , just around the corner. It’s vegetarian but has loads of vegan options. It’s a buffet sold by weight so I usually end up spending thirty quid! The Gate in Islington is really good too.

Aside: I have since tried this recipe and second Ellis’ choice. Absolutely delicious!

For coffee, brown rice milk; but almond milk for tea. Although I don’t mind going without!

Find Ellis Slater Music on Facebook
Buy West St. EP (All proceeds from the first week of sales will be donated to Hollyhedge Animal Sanctuary ). The EP will be released on Monday 8th August 2016.

Ellis is recording his new album this month.

It’s now been several weeks since ‘Carnage’ debuted on BBC iPlayer and, so far, the reaction has been overwhelmingly positive. Both non-vegans and veg...

This lovely mushroom soup is guaranteed to impress your friends, vegan or not! In this recipe, we have used nuts to develop a thick creamy texture tha...