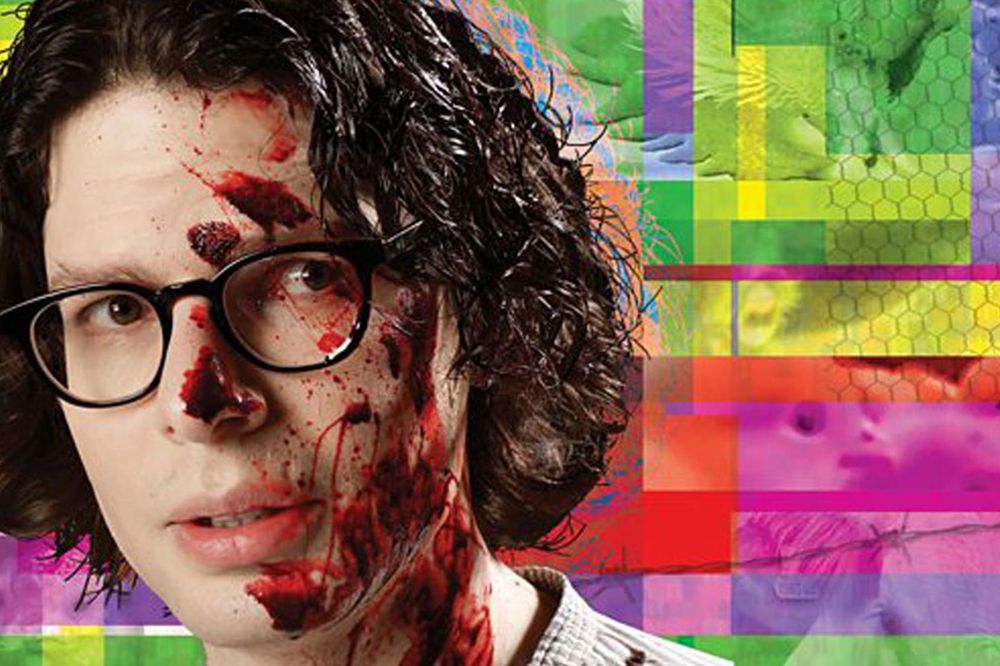 It’s now been several weeks since ‘Carnage’ debuted on BBC iPlayer and, so far, the reaction has been overwhelmingly positive. Both non-vegans and vegans have been flocking online to their blogs and twitter pages to sing its praises.

laughing and crying at #carnage at the same time. hilarious, beautiful and eye-opening. time to entirely rethink my diet. @SimonAmstell

It seems like this mockumentary is the comedic, yet still serious, breath of fresh air the vegan movement has been craving. Set in a utopic 2067, where slaughtering animals for consumption is unthinkable; the film takes us on a journey through time, ethics, and humanity’s capacity for love.

The constant flitting between adverts, animal cruelty, scripted acting, and reality, alongside Amstell’s narration, leaves us giggling one moment and cringing the next. It’s exciting to see a strong vegan-positive piece like this making it into the mainstream, while being enjoyed by vegans and non-vegans alike.

We begin in 1944, which is, as we all know, the historic year The Vegan Society was created. We journey forwards through time watching our history through a lens of compassionate hindsight, reality, and fiction intertwining to create an alternate timeline a little too close to our own world for comfort.

This alternate timeline features not-too-distant disasters such as catastrophic flooding and a ‘Super’ Swine Flu outbreak in the UK. Tens of thousands die—a terrifying future that could soon become a reality for us.

Flooding in the UK has already reached worrying heights throughout the past decade, due to a disregard for our natural environment, and we’re already at the end of a mass antibiotic pandemic due to our overuse and misuse of antibiotics within the animal agriculture industry.

The movie is all about mocking our obsession with conforming to the status quo, even when faced with its devastating effects on our health and our planet.

Our futuristic fictional character, Graham—an infamous vlogger spending his time harassing vegans and lamenting the times that people could eat meat without judgement—acts as this symbol of Carnist and ‘traditional’ belief.

The vegans were still ridiculous

Don’t fret, vegans don’t escape the mockery either. From the 80’s ‘Bland Family’, clad in beige and speaking in monotone, to the hilarious elderly YouTube rappers, to the 2067 glitter-eyed sensitive teens, vegans get a light-hearted ribbing throughout the film.

Whether it’s for their falafel wrap fashion, appropriation of culture, or dramatic antics, the movie doesn’t shy away from pointing out the trivial and serious problems within the vegan movement.

What can “carnists” take from Carnage?

Non-veggies may feel confused by the overload of information Carnage gives us; it can be daunting to realise one’s participation in cruelty and even more daunting to think about changing our lifestyles.

Luckily, the recent popularity of veganism has made lifestyle changes so much easier for those looking for a more compassionate path. We live in a more understanding society and most people understand the word vegan—trust me, only five years ago, veganism was met with confusion!

And as we rapidly approach Easter, our supermarket aisles are choc-full of Easter eggs. Vegans walk these aisles, awkwardly avoiding eye contact with the shelves upon shelves of these seasonal milk chocolate treats.

A chilling artefact of a culture that once stole a cow’s milk and moulded it into the shape of a chicken’s egg.

In Carnage, we find ourselves initially bubbling with laughter, and then, a second later, the truth of this sentence hits us. The sincere reality of what Easter eggs actually are is, indeed, rather strange; Carnage points this out in its typically brutal and honest spirit.

Luckily, Easter eggs don’t have to be stolen cow’s milk. If you walk down the aisle of Sainsbury’s , or take a trip to Holland and Barrett , you’ll find a ton of exciting options for those who are Easter-ethically-minded. Each year the choices keep getting better, and this Easter there’s almost too much to choose from.

With a quick search on the internet, you’ll find vegan crème eggs or, if you’re feeling daring, you could try making your own chocolate mousse and caramel-filled egg.

Once we get past that initial fear of ‘giving things up’, we realise that we are, in fact, embracing new things. We can fall in love with cooking plant-based meals, we can experiment with vegetables and new ingredients we’ve never tried before. We can create from scratch, eat nutrient-rich foods, love and respect our bodies, and appreciate the planet and everyone else around us.

The abundance of options now is staggering, from mainstream chains like Tesco and Sainsbury’s launching their own vegan alternatives, emerging popular ethical fashion brands like All Glamour No Guts , and famous celebrities like Kat Von D turning the remainder of their beauty products vegan and cruelty free—it’s now easier than ever to make the change.

Well #Carnage by @SimonAmstell is basically genius. Hilarious, clever, brutal & even made me choose a salad for lunch yesterday. Boom.

Veganism is here, and it’s here to stay

Carnage’s self-aware take on the world we live in calls into question all we know about our habits of consumption. We are confronted with the cruelty our lifestyle choices inflict on other living beings, we are told in no uncertain terms the terrifying effect animal agriculture has on our environment, and, most importantly, we are shown that there is hope for change.

A key message in Carnage, and in the vegan movement itself, is that veganism is a natural and kind way to live life. It may not be the easiest to begin with, but when we eventually get past our cognitive dissonance and embrace these changes, we begin to realise:

“WE ARE NOT VEGANS. THEY ARE CARNISTS.”

Is vegan “junk food” damaging our health and our reputation?

In recent years there have been many vegan/plant-based conversions and much of that could be credited to an increased availability of meat and dairy a...

I met Ellis Slater and his Jack Russell, Molly, in the Blue Posts pub in Soho. We chatted over a couple of (vegan-friendly) beers and I polished off a...