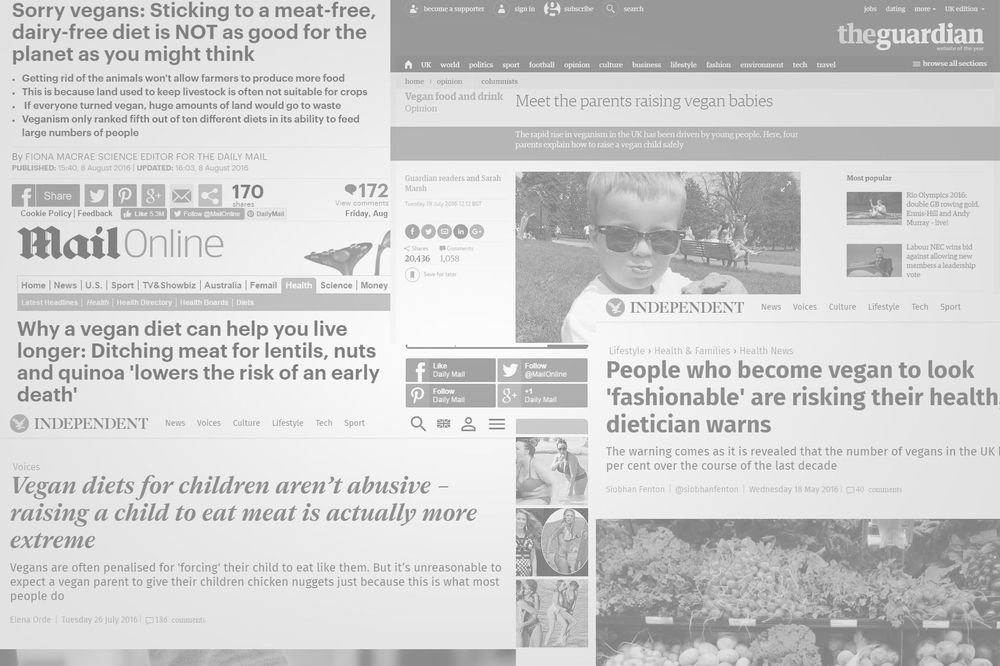 Don’t Force Veganism on Your Kids!… What’s Your View?

I have always been firmly in the: “You shouldn’t force your beliefs onto your children”, camp and until recently, this even included veganism. However, a few things have begun to change my mind.

The power of conversation

The other day I was discussing veganism with a friend who has been mostly vegetarian since childhood and has recently begun to embrace a more plant-based diet. This one conversation was the root of the change in my perception of raising vegan children.

As I explained my reservations about imposing a plant-based diet onto a child, my friend recounted her feelings of anger on finding out that her parents had been feeding her animals and, going forward, refused to eat meat.

Prior to this, I had always assumed the opposite: that a child would be angry if they were “denied” animal products. To hear this was quite an eye opener for me. I remember (with an immense sense of embarrassment) being somewhat scathing of vegetarian kids when I was at school – especially those few who had been raised vegetarian since birth – and definitely thought they were missing out. But, society is becoming increasingly more accepting, as highlighted by the media in the past couple of weeks…

When I heard that The Wright Stuff (jump to 57:45) were going to be debating whether or not it is abuse to put your kid on a vegan diet I have to admit my heart sank; this kind of mainstream media coverage almost never portrays veganism in a positive light. In this case, though, I am glad to say that I was able to eat my metaphorical hat.

It began badly. The words “extreme” and “strict” in regards to a plant-based diet were used in the introduction, immediately followed by reference to a malnourished child in Milan who was removed from his parents because they fed him a vegan diet.

But then… Enter Jimmy Pierson, the Vegan Society’s Media and PR Manager: a fantastic poster child for veganism. Positively glowing with health and vitality (what a relief when all-too-often vegans are misrepresented as a weedy, sickly bunch) he calmly began to debunk all the common media rhetoric with a conversational smile.

RESEARCH IS JUST AS IMPORTANT IN AN OMNIVOROUS DIET, SOMETHING WHICH I BELIEVE IS OFTEN OVERLOOKED SINCE IT IS SO UNQUESTIONABLY THE NORM

It got better. Caller one was steadfast in her belief that a vegan diet is tantamount to abuse (enter Jimmy again) but callers two, three and four were firmly – and rationally – in the pro-vegan camp. My favourite part? When Helen Lederer gushed, “I want to be a vegan now. Just let me be a vegan if I can look like him!”

A few days later The Guardian got in on the act , profiling four parents raising vegan babies. Again, I was somewhat blindsided by the positive portrayal of veganism in mainstream media.

The parents covered much of the same ground as Jimmy Pierson: explaining how research plays an important part in ensuring their child has everything they need nutritionally, in the quantities they need it. Arguably though, research is just as important in an omnivorous diet, something which I believe is often overlooked since it is so unquestionably the norm.

Schooled by a child

As children grow up though, the impact of their parents’ decisions on their lives can become apparent. I was faced with this when I did a day’s supply teaching. I met a child who, on first impressions, seemed to be suffering from a form of compassion fatigue .

While other kids told me what sports they liked to play, this particular child – let’s call him Daniel – began the day by proudly introducing himself as a vegetarian. My heart skipped a beat but I vowed not to make a big deal out of it, in fact, not to even mention my veganism unless it somehow came up. Inevitably, it did.

That afternoon, while the kids were discussing jobs in the fashion industry I noticed that Daniel was visibly upset. The boys on his table were – as 10-year-olds do – pushing his buttons and he was responding beautifully. As one of his peers described the use of cows to make leather, Daniel spoke directly from my heart: “But I don’t think humans are more important than animals!” And burst into tears. I simultaneously admired, envied and despaired for him. Was this the daily life of a vegetarian child?

I took a step back. Kids can be mean, as adults can. At ten, they are flexing their opining muscles, trying to work out what they think and seeing how far they can push the people around them. As a vegan, who isn’t even morally sure she should have kids, it’s tough because you have a snapshot of the future and the difficulties your maybe-child might face in the classroom: being seen as ‘different’ and, perhaps, becoming over-emotionally involved far younger than they might.

At the end of the day, after he had recovered from his tears, I snatched a moment to gently quiz Daniel about his vegetarianism.

“How long have you been vegetarian?” I asked.

He didn’t mind talking about it, in fact, he seemed to enjoy it. “Since I was one. Um…” He corrected himself. “…Since I was born.”

“So was it your choice?”

He shook his head passionately, “No. But if I could choose I would choose to do it anyway.” And with that, he rushed off, just like all the other kids and got lost in the crowd.

Daniel, in the space of a few hours, reminded me of both the fragility and strength that can be found within a child if you give them the chance; the fierceness of passion combined with the ability to lose oneself in the moment and play. Found in just the right balance in a child, these are a force to be reckoned with. And, to the adult that observes – a little envious of their ability to feel so wholly – it serves as a gentle reminder of their resilience.

I am very much a believer that children are infinitely more capable than we as a society give them credit for. As a primary school teacher, I have seen 11 year olds with almost superhuman powers organize their entire year group to play successful games of ‘gang-up tag’. Trust me, that’s no mean feat.

ULTIMATELY, AS A PARENT YOU MUST DO WHAT YOU BELIEVE TO BE BEST FOR YOUR CHILD

Yet, there are some things that children do not have the ability to do without a significant amount of guidance. Making rational, well-informed decisions by fact-checking and using multiple sources of information is one of these. In fact, many adults – myself included – can also struggle with this. Bias is everywhere and wading through swathes of contradictory information can be confusing at best, overwhelming at worst.

As a parent, or a caring adult, it is our job to help children navigate the world they live in and help them to make informed choices that will enable them to grow into healthy, happy, compassionate adults. The fact remains though, that infants and young children rely on their adult care-givers to make certain decisions for them – what they ingest is an example. Therefore, whatever we choose to feed our kids – be it a vegan or omnivorous diet – is, in some way, “forcing an ideology” onto them.

If I choose not to eat dairy products for both ethical and health reasons – and then I read a report by the World Health Organisation warning about the adverse effects of cow’s milk on infants – I am going to pay attention: as a potential parent I know I will want the best for my child and, as a result, would choose a plant-based diet for them from birth. Should I have kids and be unable to breastfeed, I would feed them soy-based rather than cow’s milk-based formula, or even look into milk banks and sharing communities such as Human Milk 4 Human Babies as suggested by one of my vegan mummy friends.

Ultimately, as a parent you must do what you believe to be best for your child. I just happen to believe that children are able to thrive on a well-researched and nutritionally balanced plant-based diet.

For more information about raising healthy vegan kids, the Vegan society has a wealth of information (fully verified by the British Dietetic Association ).

Once upon a time, being a vegan in London was a difficult task, as many restaurants offered limited menu options, or nothing at all. If we fast-forwar...

This nutritious snack is delicious, especially on a lovely sunny morning, and will keep you filled up until lunchtime. Don’t like banana or mango? You...