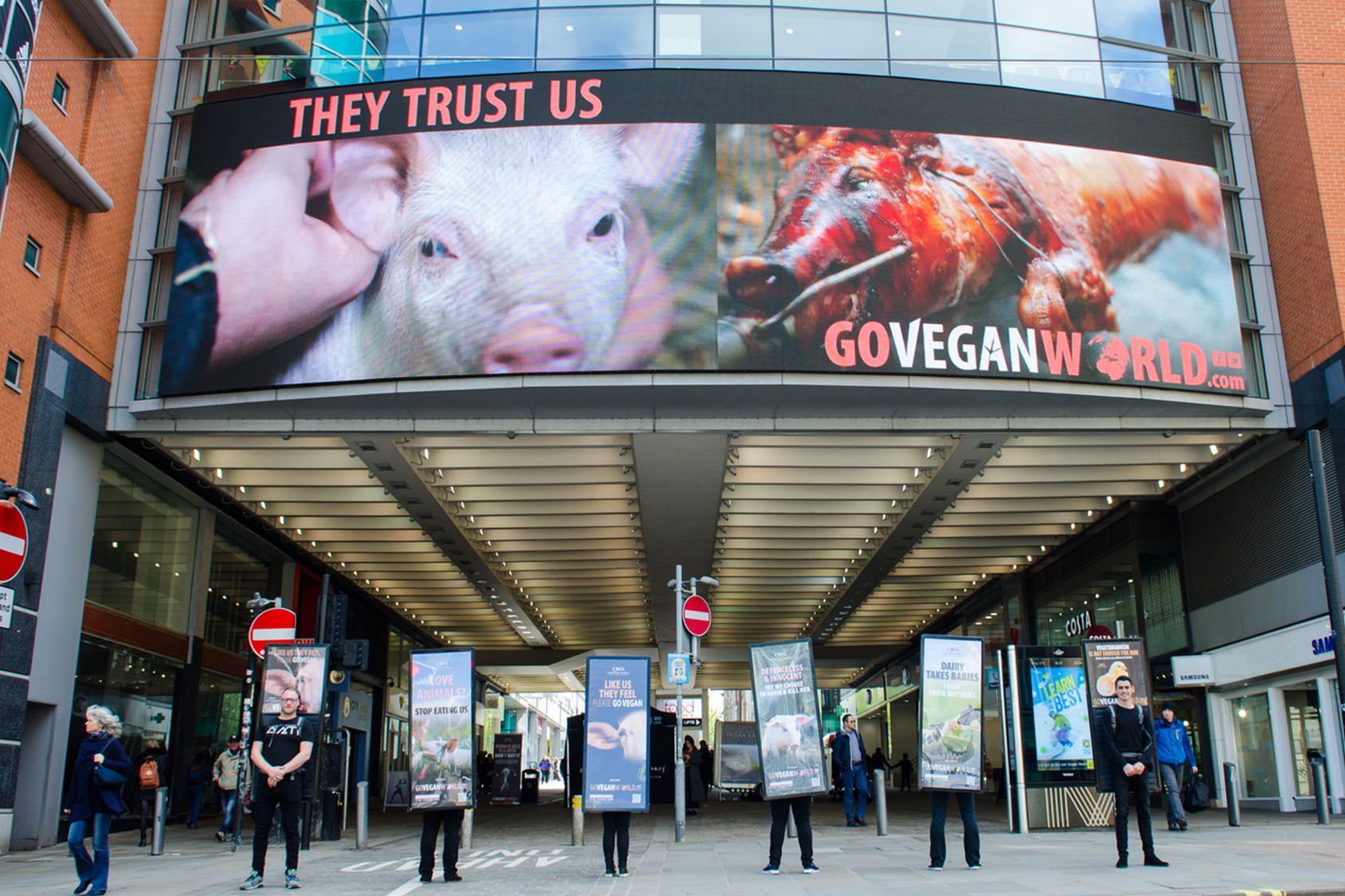 Saturday April 22nd was Vegan Education Day. 300 buses took Go Vegan World to the streets of Manchester to educate the public about animal rights and the hidden lives of animals in the food industry.****

With the help of vast digital screens, posters, 200 bathroom adverts and even jet washed pavement advertising across the city, the Go Vegan World team were determined to make their message loud and clear.

Most people are pleasantly surprised to find that it is easy and enjoyable to be vegan, especially when motivated by our deepest values of justice and fairness.

Trying something a little bit different, the team used virtual reality headsets to allow people to experience the shocking lives of the animals that are so often hidden from view.  However, the awareness campaign wasn’t all shock as visitors and passers-by were also given the chance to try delicious vegan food, chat to Campaign Director Sandra Higgins, and take home a copy of their free vegan guide .

Go Vegan World’s many volunteers gave out information on the benefits of veganism on a global scale; such as the impact of animal farming on the planet, the contribution animal farming has to world hunger and the harm that animal products cause to human health. The team also explained how easy, cheap and rewarding veganism really is. As Sandra says “Most people are pleasantly surprised to find that it is easy and enjoyable to be vegan, especially when motivated by our deepest values of justice and fairness.”

The event propelled itself into Sunday with a free screening of ‘What the Health’, a follow-up from the makers of ‘Cowspiracy’. Next month, Sandra and others will be speaking at Manchester University’s Student Union at the event ‘Awakening Compassion: a tri-factor talk on veganism.‘ It’s great to see them maintaining the momentum from the launch of their campaign last year.

By now, many shoppers will have seen the team’s memorable posters, with slogans such as ‘Dairy Takes Babies from their Mothers’ and ‘Their Right to Life: Your Right to Health’, while  Go Vegan World’s vegan guides are being downloaded by hundreds each week. It’s also fitting that Vegan Education Day shares its date with Earth Day. A love for the planet and the decision to lead a vegan life go hand in hand.

Is a Vegan Diet as Sustainable as we Think?

Veganism is by definition an animal rights movement, but the meteoric rise in plant-powered living isn’t down to animal lovers alone. 38% of new veg...

Many would agree, supermarkets are convenient, but it’s nice to know where your food comes from and incredibly satisfying to know you grew it yourself...