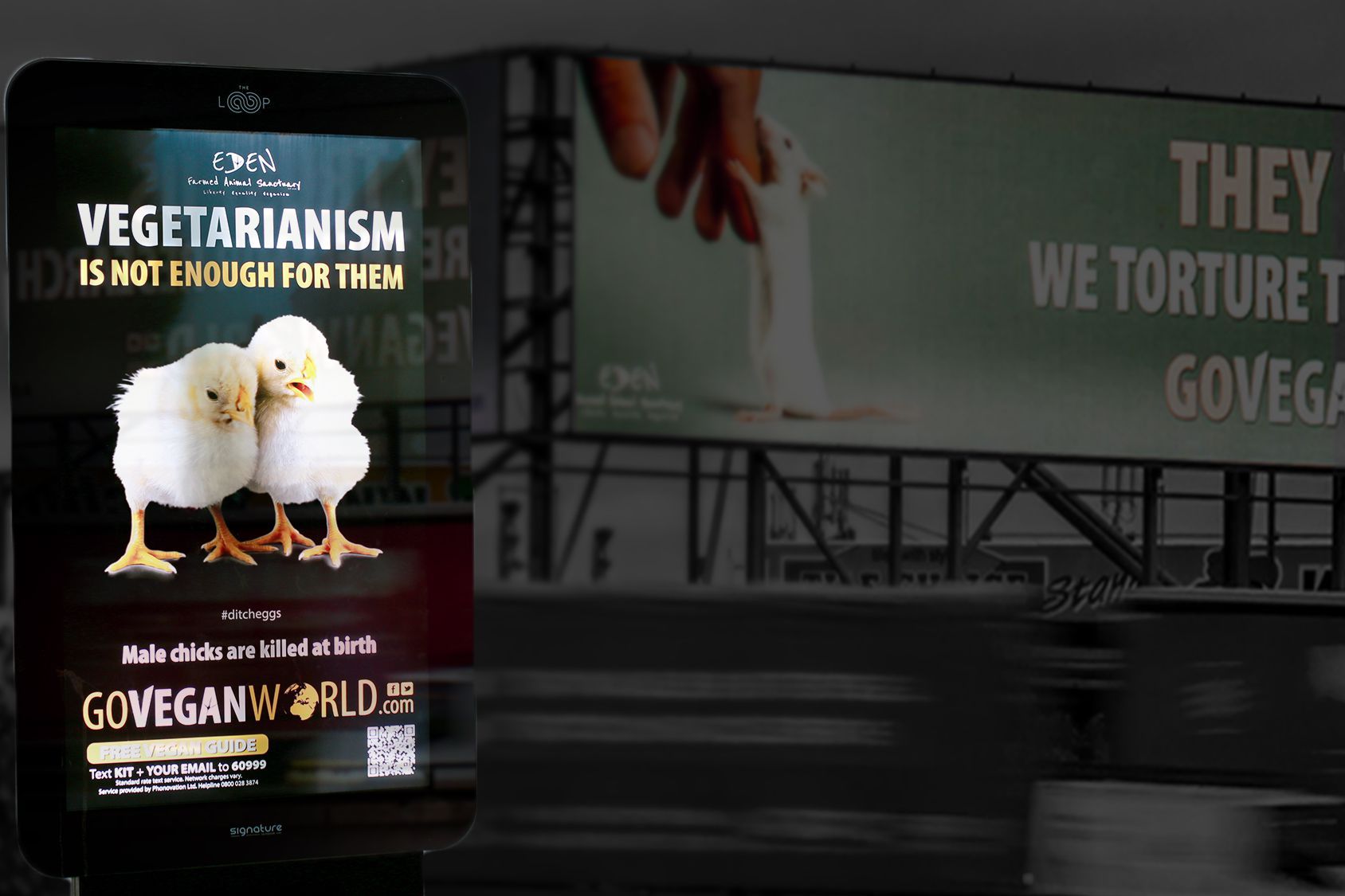 Go Vegan World: Opening the Eyes and Hearts of the Public

In recent months, something unusual has been happening across the UK. New posters depicting cows, pigs, and chickens have been appearing, but this time not as adverts for burgers, milkshakes and supermarkets. This is the world’s biggest animal rights campaign and is the creation of Go Vegan World, an educational organisation run by the founder of the Eden Farmed Animal Sanctuary.

An alternative approach to vegan outreach

While the meat, dairy, and egg industries have traditionally advertised cosy images of animals delighted to be selling their own flesh and produce, Go Vegan World has turned the tables on this injustice, revealing to the consumer the individuals behind their choices.

“Most people say that they are learning information that they were not previously aware of, particularly with respect to the dairy and egg industries.”

While the last few years have seen health and environmental benefits become possibly the biggest sell for new vegans, Go Vegan World’s approach to the campaign is firmly rooted in animal rights and they do not skirt around the issue.

The emotive slogans and images employed are certainly direct and perhaps risk being too strong a message for the moderate viewer, especially as veganism is too often unfairly seen as confrontational and aggressive.

However, while the campaign’s approach is brutally honest, it is also educational and by using a medium familiar to all – advertising – animal rights has finally entered the mainstream consciousness. Of course, it helps that the message of Go Vegan World has, as Sandra says, ‘the added benefit of being the truth.’

A happy and beneficial coincidence

The campaign went live in mid 2016 and coincided with Veganuary and PETA ’s recent work in January 2017. Initially rolled out in Ireland, Go Vegan World’s message can now be seen on digital advertising displays across the UK’s major city centres and for the first time, a vegan television advert is being broadcast nationally.

Better yet, in February this year, a global audience saw vegan campaign material at an international sporting event as Ireland played Italy in a Six Nation’s rugby match while Go Vegan World’s website received close to 2000 new visitors each day with downloads of their vegan guides hitting 500 per week.

Some industry resistance is to be expected

Unsurprisingly, most of the kickback has come from industries that are directly involved in animal exploitation, using the tired stereotype that vegans hold staunch anti-farming views. While that is certainly true in regard to animal agriculture, most vegans (and Go Vegan World) recognise the importance of farmers and farming and instead wish to encourage a move towards growing protein crops .

It is a simple fact that the reduction of animal farming and an increase in crop production would result in lower greenhouse gas emissions, decrease the use of natural resources, and help to eliminate animal suffering. The good news is some farmers have already made this move and hopefully more will follow.

“Go Vegan World has always sought to support plant based agriculture and to point to the fact that farmers who exploit other animals as a way of making a living, are themselves exploited by the larger industries.”

It is great to hear that so many people are listening to the voices of those so often silenced and I admire Go Vegan World’s achievement in creating a highly successful way of educating the wider public.

However, as Sandra says, ‘the most successful story of all is the fact that, for the first time in history, other animals are being represented in public in a way that is accurate and shows them for who they are instead of being advertised as objects of human use.’

This and other recent awareness initiatives are a big leap forward for animal rights and a sign that the public is accepting that the rights of animals are as much a human issue as a non-human one.

So you have taken the leap to become vegan, or maybe you’re just curious. Well, you’re in the right place! These top vegan tips will help you hit the ...

A hearty, satisfying meal when you want something comforting and filling. These tasty sweet potato and chickpea patties are also great to have as left...